Wild about the Garlic

June in Burgundy is a time for outdoor living. No surprises really as France has been incredibly hot these past few weeks with temperatures approaching 40° Celsius (that’s the equivalent of around 100 Fahrenheit). On Le Papillon the wine chiller is doing overtime and beer fights with the cheese for fridge space – well we wouldn’t want to get dehydrated (nor run out of cheese)!

We’re so far in land though that it’s a good dry heat, even on the waterways. Perhaps best of all the water keeps the trees lush and verdant all along the towpath. Weeks like this we often jump off the barge come lunchtime, find a spot in the shade, set up a table and chairs and eat in the great outdoors whilst drinking in the scenery. 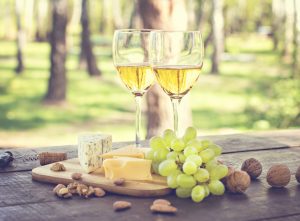 The Italians would call this ‘al fresco’ but in France it’s simply ‘en plein air’ – in the open air. It’s a very French concept and the term was really coined by the great impressionist painters such as Claude Monet, Camille Pissaro and Pierre-Auguste Renoir. It’s a great way to paint – on the one hand the sun sparkles off the water but, at the same time, throws deep shadows along the banks. So romantic; so mysterious.

In light like that, distance often gets foreshortened and it feels like you can reach out from the bridge and pluck the apples from the trees in the lock-keepers’ gardens. Being so close to nature for so much of the day is a huge delight. In the heat of the day the vines seem somnolent – although we hope not and know that, secretly, underneath their leafy fronds. they’re busy at work making this year’s vintage. No room for sleepy vines in Burgundy! 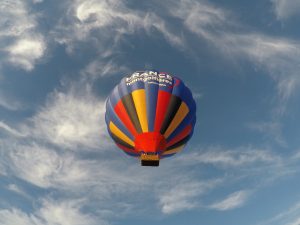 But there’s more. We have ‘plein air’ and then there’s ‘gross plein air’ – this time of year the cooler mornings and evenings are perfect for hot-air ballooning. We have a great set of ballooning buddies who run France Montgolfiers. Historians amongst you may know that the Montgolfier brothers, Jaques-Etienne and Joseph-Michel, invented the hot air balloon and made their first successful ascent in June 1783. Then, in September, their balloon carried its first passengers – a sheep a duck and a rooster! Etienne Montgolfier, the brothers’ father, was the first human to fly on October 15th that same year.

It’s a great story and incredibly French. Most weeks we organise a trip to carry our own (human) passengers high into the plein air to see Burgundy from above. The patchwork of fields and vineyards and orchards and haystacks is truly remarkable. It’s a shame that Monet and Pissaro never got to enjoy and record their impressions. It would have made for great conversation over a glass of pastis around a towpath evening barbeque.

As for the nights they are simply starry – starry enough for Vincent Van Gogh and Don MacLean all at the same time!